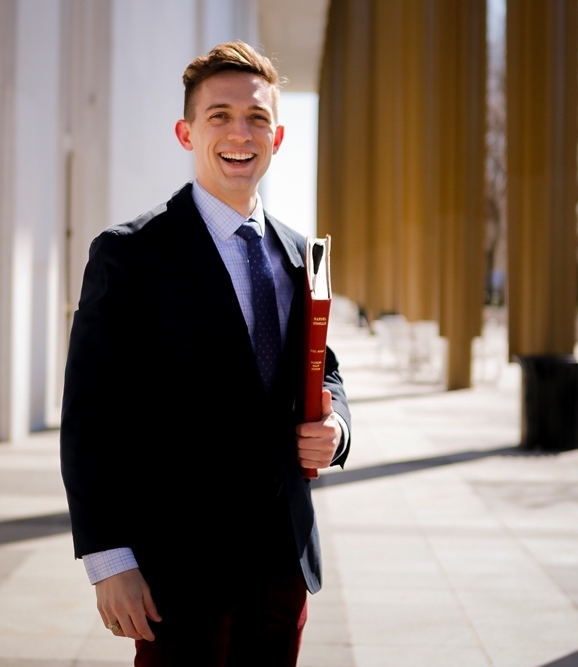 Anthony Blake Clark has been named Artistic Director for Bach Vespers at the Evangelical Lutheran Church of the Holy Trinity on Central Park West and 65th Street in New York City. The dynamic choral conductor – known for his energetic style and eclectic programming – is Music Director of Baltimore Choral Arts, one of Maryland’s premier cultural institutions and Director of Choral Activities at the George Washington University’s Corcoran School of Art and Design. The versatile director and composer is equally at home conducting Baroque, Renaissance, Classical and modern works.

“Blake is a gifted storyteller who brings great energy and joy to the words and music of Johann Sebastian Bach,” said the Reverend Timothy Weisman, Pastor of the Evangelical Lutheran Church of the Holy Trinity. “Blake’s artistic vision honors the historic Bach and interprets Bach for 21st century audiences.”

“Bach speaks to our human experience,” said Mr. Clark. “I’m passionate about the man and his music, and I’m excited to collaborate with the musicians and members of Holy Trinity to bring his story to life through Bach Vespers and shape the next chapter of this unique music ministry.”

Bach Vespers has presented the work of J.S. Bach and his contemporaries within the context of a Lutheran liturgy for nearly 55 years. Mr. Clark is the sixth conductor to lead the iconic series at Holy Trinity. Mr. Clark will direct this season’s program “Playing with Fire” that includes ten of J.S. Bach’s major choral works. His first appearance with Bach Vespers will take place on Sunday, November 13 th when he will conduct J.S. Bach BWV 26 Ach wie flüchtig, ach wie nichtig.

“Together, we’ll encounter the historic Bach and explore his musical and physical worlds,” said Mr.
Clark. “We’ll also illuminate Bach’s world through modern choral works that enhance our understanding of
his message.”

Mr. Clark conducts orchestras and choirs and works with professional and amateur ensembles in the USA and Europe. During his tenure with Baltimore Choral Arts, he has consistently received top reviews both for work at the podium in his subscription concerts and his preparation of choruses for performances with the Baltimore Symphony Orchestra, Annapolis Symphony Orchestra, Maryland Symphony Orchestra, and the Peabody Preparatory Orchestra.

Mr. Clark is passionate about teaching and conducts the University Singers and Women’s Ensemble at George Washington University. With his university choirs, he has led performance at the John F. Kennedy Center for the Performing Arts, Washington National Cathedral, and the Music Center at Strathmore. An active composer and arranger, Mr. Clark has had his scores performed in the Washington D.C. area, London, Oxford, Texas and at Prague’s Dvorak National Museum Concert Hall.

Fire captivates and mesmerizes. Fire illuminates and contradicts, symbolizing beauty and volatility, destruction and rebirth. Fire can entice us to take risks and cross traditional boundaries.   The 55th season of Bach Vespers at Holy Trinity not only features a program of bold choral works by Johann Sebastian Bach that each possess a fiery brilliance, but the words and music this season depict people and events where the act of playing with fire resulted in dramatic disruption, transformation, and change.  In addition to five, fiery chorale cantatas based on familiar Lutheran hymns, this season features large-scale narrative works including the Magnificat in D Major, the St. John Passion performed in two parts (on the Sunday of the Passion followed by Good Friday), and the Easter Oratorio. In keeping with the Leipzig tradition not to perform cantatas during the season of Lent, we will be joined in March 2023 by eminent organist, improviser, and church musician Bruce Neswick who will lead us in singing Baroque chorales in the style of Bach’s congregations and perform works based on Bach's favorite Lenten chorales.   The words and music of Johann Sebastian Bach have burned brightly at Holy Trinity for more than five decades. Join us as we, too, play with fire: engaging early music and a historic faith in new and compelling ways.